So it’s over. I made an entire season of football (without having to stand around in a short little skirt waving pom-poms like a moron). Phew! Made it… No more reading my newspaper while sitting on a cold cememt stoop…

Although, I think it’s kind of sad they’re not still having a parade for the players. I mean, they got Philly to the Super Bowl for the first time in, what, 15 billion years? They deserve some kudos. Granted, there are probably plenty of hardcore fans out there thinking tying them to a stake covered in sugar and fire ants is more fitting.

I dunno. Of course, I’m also the person spending inordinate amounts of cash on electronic devices in an attempt to sucessfully cohabitate with a mouse… a rodent… so as not to make him homeless in the dead of winter. A RODENT.

Survival of the fittest obviously takes a vacation at the Netherhouse. 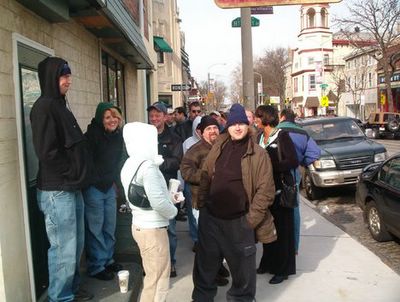 How the hell did I get roped into this? And why does Pat look constipated? Should I be standing that close?!!?!

We’ve been doing this for months.

Mom would be so proud. (He tries to pretend like he’s the “normal” sibling….).